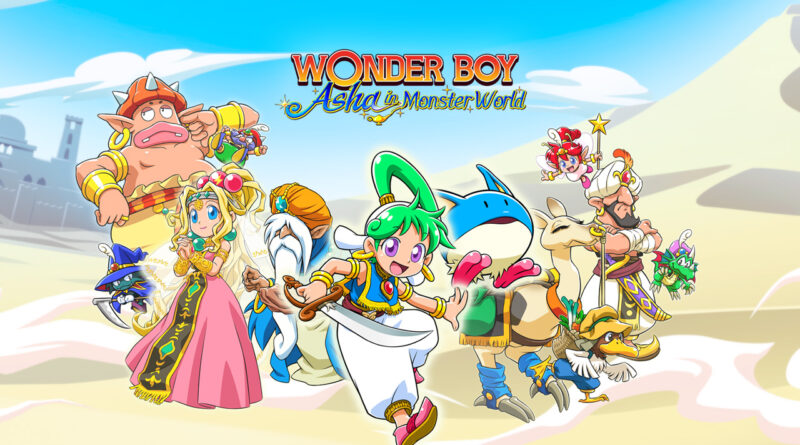 Me From The Future! I’ve had the opportunity to check out the original Monster World 4! You can read it here at 1UP Infinite!

A quick thank you to the good folks at ININ and StudioArtDink for providing a small games writer with a code for this awesome remake of an obscure classic. The former were the same guys who published the equally impressive Bubble Bobble 4 Friends in which I also took a look at over the holiday season. The Wonder Boy Monster World series is a very interesting subject to discuss historically, so I’ll do my best to fill the unaware in.

Unfortunately, for the longest time, Monster World 4 was not only an end of the Sega/Westone era but it also was not released outside of Japan as it was the final Wonder Boy/Monster World original title until 2018’s Monster Boy and the Cursed Kingdom. In 2012, Monster World 4 was finally released to a western audience on the Wii Virtual Console, PSN, and Xbox Live Arcade, allowing players to experience the title eighteen years later. 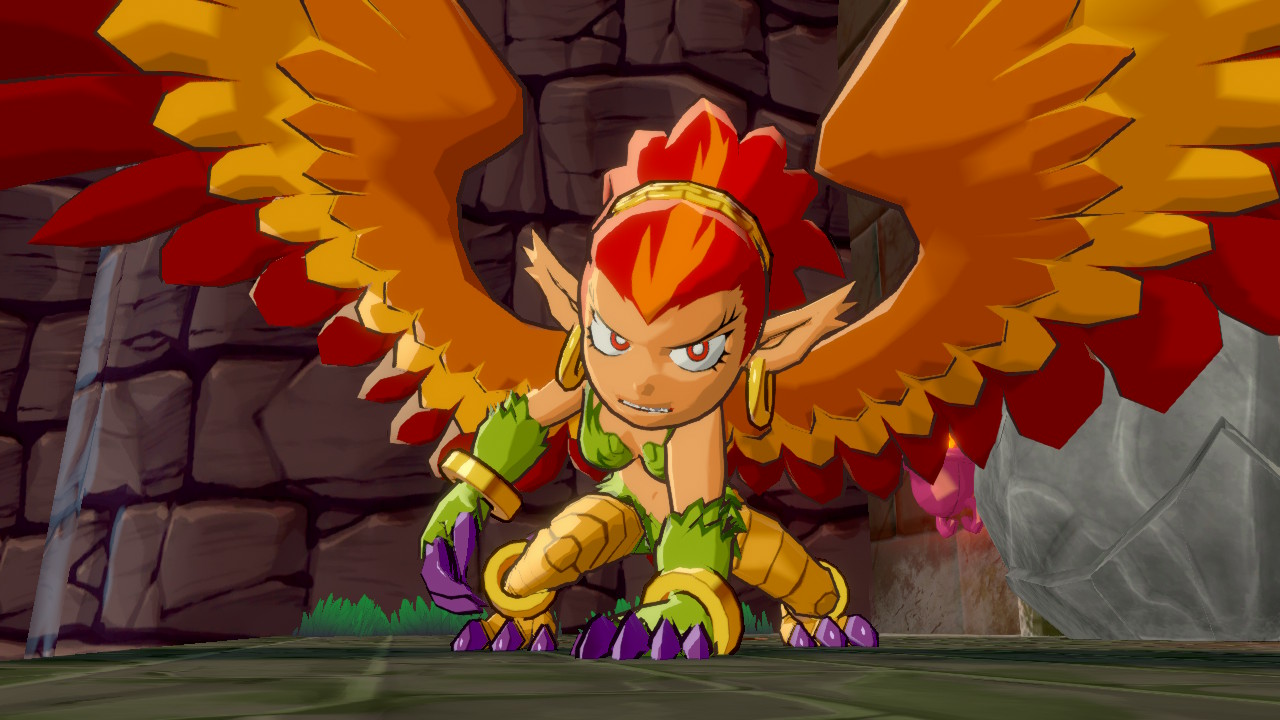 Now, in 2021, fans and newcomers alike can experience the title as a complete remake, complete with 3D graphics, voice acting, cutscenes, and remastered music. Developed by Artdink with help from Monkey Craft, Asha in Monster World is a complete reimagining of Monster World 4 from the ground up. Does the classic gameplay from the 90s hold up 27 years later? Or is it too little too late to wow a potential audience? Here’s my full review of the title now that the rush of E3 is over and done with!

A bit of a warning, there are slight spoilers but nothing too crazy as the game is honestly on the short side. The plot is good ol’ “Protagonist sets off to a distant land to become a hero and save the world with her trusty cute sidekick” 90s goodness, but it does have some pretty intense scenes. Well, as intense as a mid-90s platformer can establish. 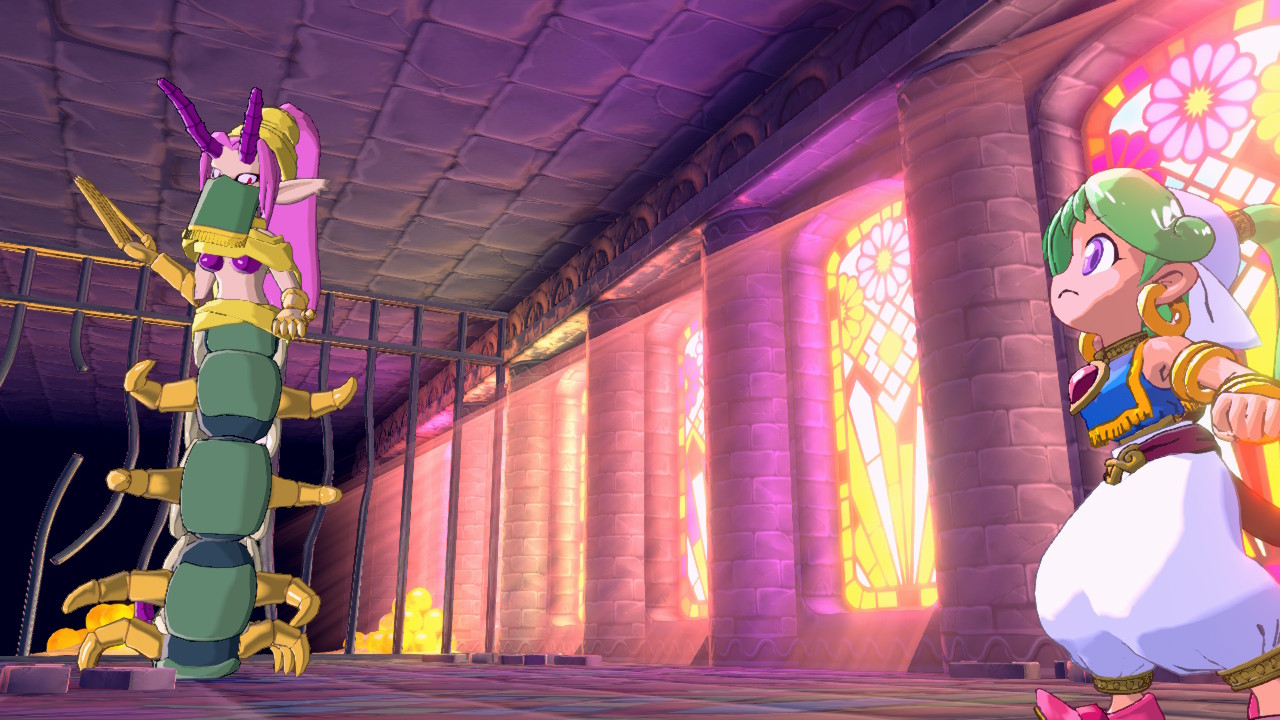 Asha, a young woman from a small village town, sets off to become a hero, and to prove herself she travels to the city of Rapadanga. Once there, she’s tasked by the queen to free four spirits to save the world from darkness. Not everything is as it seems, as the city itself also harbors some cursed secrets in which Asha will uncover as the game progresses. Ultimately, Asha defeats the lurking evil and saves the city as she is praised as a true hero of Rapadanga.

One thing I will say is that as short of a journey Asha’s adventure was, I grew attached to her as a protagonist, including the relationship between her and her sidekick, a blue pepelogoo which are the mascot animals of this game. After receiving one shortly past the prologue, her attachment to the blue fuzzball is endearing, including feeding it, watching it grow, and occasionally using it to traverse large gaps and puzzles. 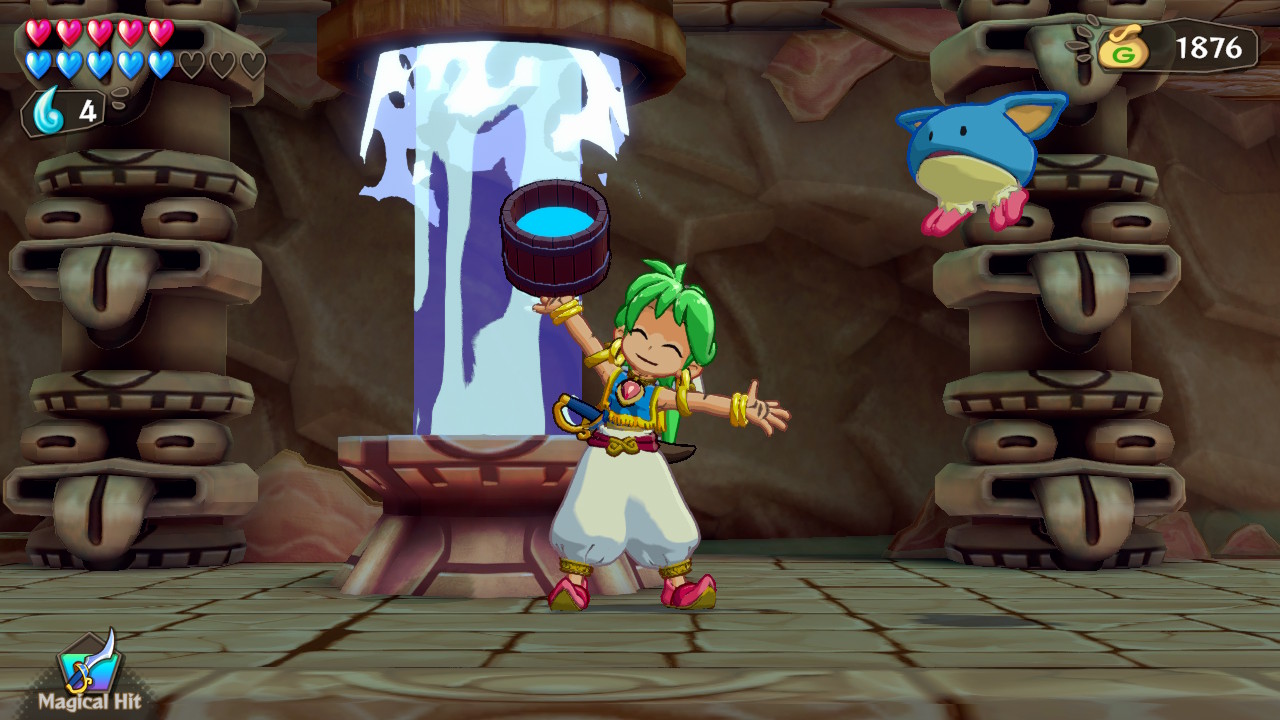 As soon as Asha reaches Rapadanga City, the city becomes the game’s main hub, connecting her to the various levels she must go through in order to free the spirits trapped in each level. If the prologue level is to be counted, plus the four levels connected to the temple and a final level containing the boss, there are only six levels in the game in total. Each level can be completed in a short amount of time and the ability to save anywhere puts a hamper on the difficulty.

There were levels that gave me a run for its money, however, as the third level which housed the Ice Wizard, the icy pyramids, were a stark contrast to the levels prior. Up until that point, the levels, consisting of a spiraling tower, an active volcano, and a deep jungle temple, were largely straightforward.

In the Icy Pyramid level, the player is required to use their wits as puzzles require memorization to persevere. The swordsmen introduced will also test the player’s combat knowledge, as they can block your attacks as well as you can block theirs. It’s a moment’s reprieve, but the ice levels were some of the most fun I’ve had playing Asha in Monster World.

Unfortunately, as far as difficulty is concerned, every single boss in the game was on the easy side, as in I didn’t need to really know its attack pattern and if a boss had such an attack pattern, the general strategy was to brute force my way into attacking while soaking up damage. In Asha in Monster World, you only have one life and start with three hearts. In collecting life drops, however, you can increase your bonus health to have much more than your starting heart total.

For reference, this was my final set up before the final boss. The hearts in red indicated my actual heart count, which can be increased with accessories. The blue hearts were all of the hearts I’ve obtained through collecting life drops. As every attack and hazard only deals one heart at a time, the general strategy for most bosses is to simply push through and out-damage your foe, which is easy if you utilize your Magical Hit ability. 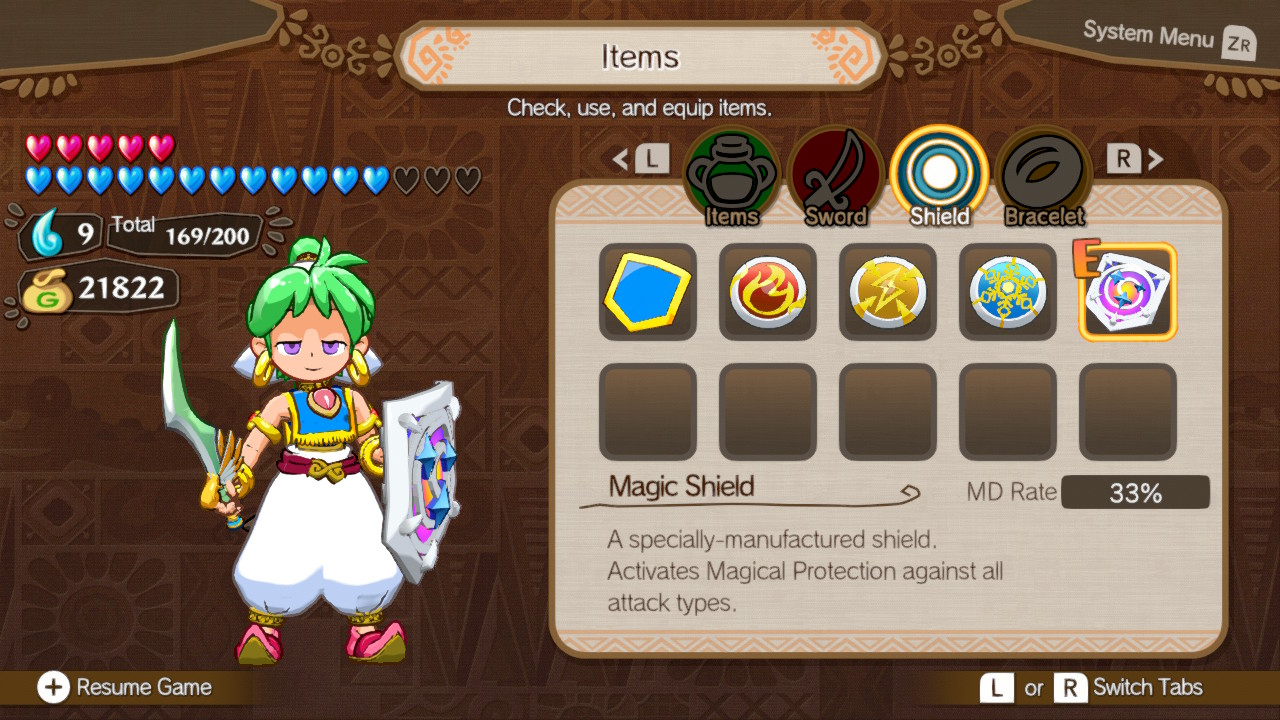 An update as I’ve already begun writing, but, I went back to the final boss area and ported back to town as you’re given a lot more gold to spend than you know what to do with it. Upon returning, the travelling merchant who makes appearances throughout the game also returns with quite possibly some of the most broken items to grace a platformer.

These items are purely optional as at this point these are there just to say “I have a huge amount of money and I don’t know what to spend it on,” but just for the heck of it, I got the Legendary Sword and Legendary Shield. The Shield itself blocked like every other attack automatically and the Sword, alone, without any Magical Hits, four-shotted the final boss. I four-shot the boss by just wildly swinging a sword. The Master Sword could never. 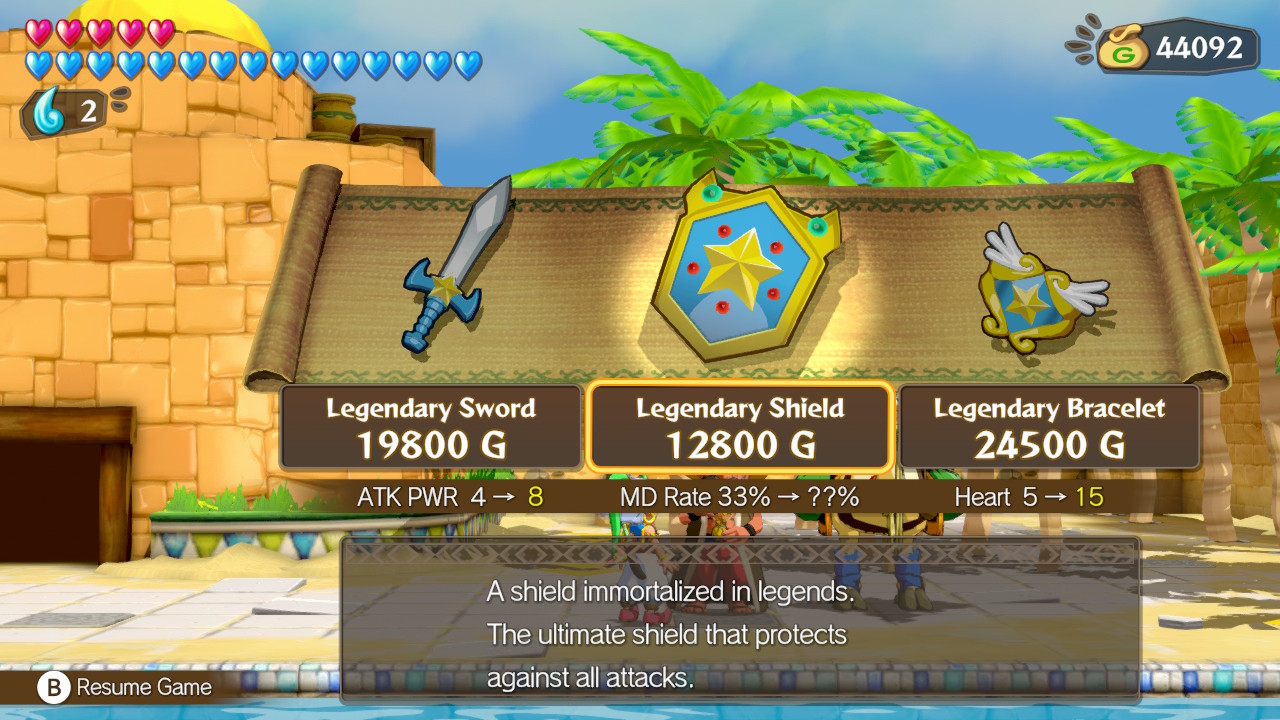 It may sound as if I’m ragging on this game for its difficulty when it’s far from the truth. In all honesty, these types of games are very open-ended when it comes to playstyle. I’m certain you can beat the entire game using nothing more than your starting sword and shield as a challenge, and it would make the game much more challenging as the player would be forced to identify mechanics and be more cautious.

From a casual playthrough, however, the difficulty is too easy once the player starts earning enough coin from defeating monsters and selling gold ingots and upgrading their gear. That, plus the overall length of the game, can turn some players off, however, there is a lot of charm to be had with the experience. 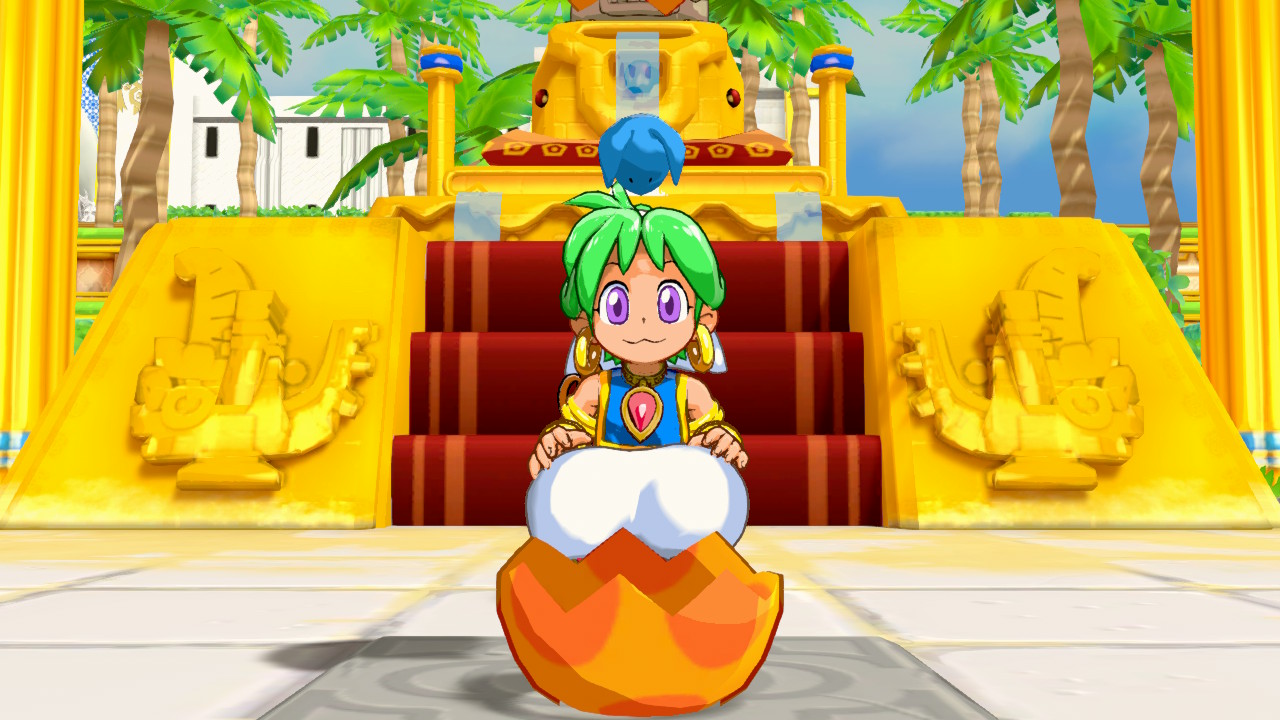 As I mentioned earlier, Asha is such an endearing character. There’s so much personality in everything she does and she interacts with the environments in a usual comical manner. The music is faithful to the original score and players who wish to listen to the original score will be happy to know that there’s a hidden “retro BGM” option. All players have to do to unlock it is to input the Konami code at the title screen. A nice easter egg. 🙂

Overall, this game serves as a great gateway to the Monster World Wonder Boy series as it’s inoffensive, faithful to the original with quality of life changes, and sets the world of WBMW quite well. It made me want to play the original Monster World 4 title to compare itself to the remake, which I just might do for a future article. If players can excuse the retro gameplay and its length, it’s a fun afternoon experience whether you’re on the couch playing on your Switch (Like I did) or you’re playing it on the big screen. 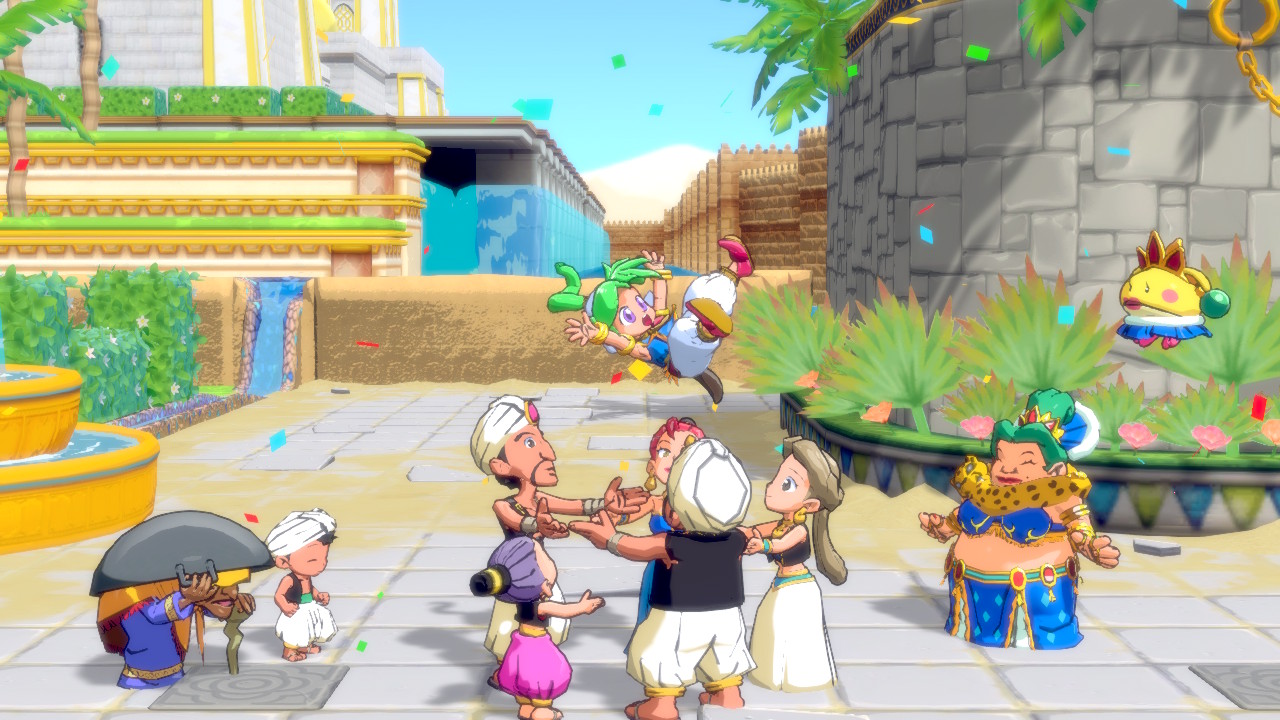 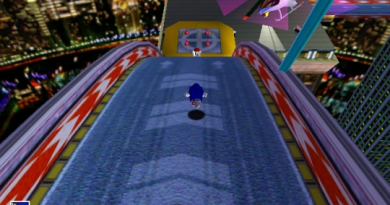